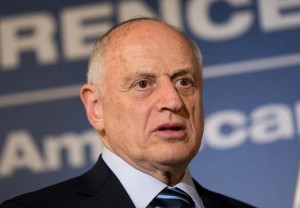 Malcolm Hoenlein, the Executive Vice Chairman of the Conference of Presidents of Major American Jewish Organizations, comes to the show. He discusses his recent trip to Saudia Arabia with a delegation of 55 persons. He speaks about the trip and the overall change in the Arab world over the last few years.

TM Garret is an author, speaker and Human Rights Activist who is most notably known for his former life as a member of white supremacy groups including the Ku Klux Klan, European White Knights and others. He explains how he fell into the wrong group as a child and then his involvement grew from there.

Discussion continues on to explain how these groups create a narrative that makes members feel as though they are “superheros saving the white race.” Garret is now a compassionate Human Rights Activist.

This week’s guest is Ambassador Danny Danon. Discussion pertains to the United Nations and Leon’s attending of a their recent Security Council Meeting. The meeting included a special address by PA President Mahmoud Abbas. Ambassador Danon was a part of blocking a recent resolution against Israel.

Ambassador Danny Danon became Israel’s 17th Permanent Representative to the United Nations in October 2015. He completed his IDF service with the rank of Lieutenant. He served among others as Chairman of World Likud, Member of the Jewish Agency Board of Governors, Member of the Zionist Executive of W.Z.O. and Chairman of the World Betar Executive.

Danny Danon was a Me​mber of Knesset from February 2009 until August 2015. He served as Deputy Speaker of the 18th Knesset, as Chair of the Committee on the Rights of the Child, and among others as a member of the Labor, Welfare and Health Committee, House, Constitution, Law and Justice, Foreign Affairs and Defense and more.

This week we welcome New York State Assembly member and Chair of the Brooklyn Democratic Party Rodneyse Bichotte, to Community Matters Radio Show. She discusses her new role as Chair and the journey to get there. She explains how this position works and why it’s extremely important.

Born and raised in Brooklyn, Rodneyse is the first Haitian-American woman elected in New York City, and the first Engineer elected to the New York State Legislature. Since became (becoming) a legislator in 2015, she has introduced over 100 pieces of Legislation, 9 (10) of which became law, and she co-sponsored over 250 others. She is also the State Committee Woman / District Leader for New York State’s 42nd Assembly District representing Flatbush, East Flatbush, Midwood and Ditmas Park in Brooklyn.

Aaron David Miller, Senior Fellow at Carnegie Endowment for International Peace, joins the show to weigh in on Trump’s Peace Plan. Discussion regarding this and if it is good for Israel.

Aaron was previously Vice President for New Initiatives at the Woodrow Wilson International Center for Scholars, and has been an advisor to both Republican and Democratic secretaries of state. He is a Global Affairs Analyst for CNN.[1]

Miller worked for the United States Department of State for 24 years (1978–2003). Between 1988 and 2003, Miller served six secretaries of state as an advisor on Arab-Israeli negotiations, where he participated in American efforts to broker agreements between Israel, Jordan, Syria, and the Palestinians. He left the Department of State in January 2003 to serve as president of Seeds of Peace, an international youth organization founded in 1993.

This week’s guest is Assemblymen Simcha Eichstein, who has just completed his first year in office. He represents New York’s 48th Assembly District, which includes the neighborhoods of Borough Park and Midwood in Brooklyn.

Discussed recently passed bills such as the Summer Youth Employment Bill, which will impact many children in the community. In Boro Park alone there was over 12,000 youth who were involved in working. The kids are able to utilize this to go to camps.

Additional discussion on the fight against antisemitism, the public’s response to the surge in hate and how the times of the Jewish community has changed. Also, the state budget, new funding for security for summer camps were discussed and more.

This week New York City Mayor Bill de Blasio joins the show. Discussion regarding the rise of antisemitism in New York City. How did we get here? How can we get to a place where the Jewish community feels safe again.

Help your community by electing officials that represent your best interests. Register to vote today.

Discover how change is within your reach by keeping up to date on the work I do to assist the community.

Discover more about Goldmont Realty Corp. This information is for building owners, investors and tenants.